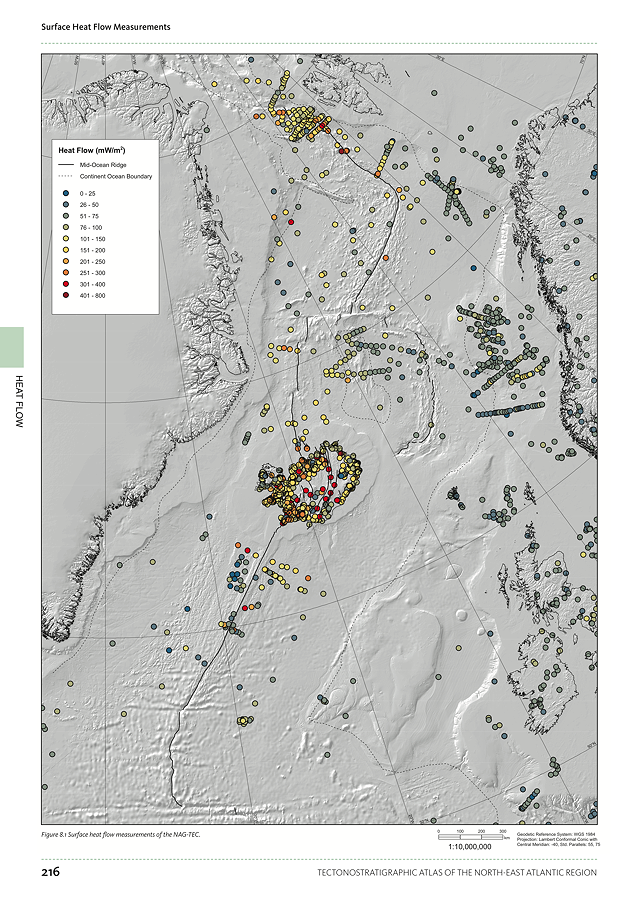 Heat flow studies provide information on the temperature structure and thermal properties of the Earth. Heat flow is the transfer of thermal energy from a high temperature area to a low temperature area. Heat flow from the hot deep interior of the Earth derives in uncertain proportions from the decay of radio-active elements (primarily uranium, thorium, and potassium) and primordial energy of planetary accretion and solidification of the Earth’s core (e.g., Pollack et al., 1993).

The main modes of heat transfer in the Earth are convection and conduction. Convection is the transfer of thermal energy by the movement of material, such as viscous mantle, hydrothermal fluids or groundwater. Heat from the core generates thermal buoyancy in the overlying mantle, which is thought to drive large scale convection in the mantle (eg., Turcotte and Schubert, 2002). The main mode of heat transfer through the lithosphere is conduction. Conduction is the transfer of thermal energy through the collisions and vibrations of molecules and atoms. A steady state heat flow in a conductive medium can be described by Fourier’s Law, which states that the heat flow is linearly proportional the temperature gradient with the thermal conductivity as the proportionality constant (q = -κ ∂Τ/∂x, where q is the heat flow, κ is the thermal conductivity, and ∂Τ/∂x is the temperature gradient). The lithosphere can be considered as a conductive boundary layer at the top of the convecting mantle. This is complicated by the two distinct types of lithosphere, continental and oceanic. Oceanic crust is produced at the mid-ocean ridge spreading centre by intrusion and extrusion of hot mantle melting products. The oceanic lithosphere eventually cools, becomes more dense, and convects back into the mantle. Continental lithosphere, in contrast, is where the Earth’s lightest elements are concentrated, and remain too light even after cooling to sink back into the mantle. Thus, spatial variations in present-day global surface heat flow are primarily caused by mantle convection and plate-tectonic processes.

Chapter 8 presents a compilation of heatflow measurements of the region and a comparison to the expected heatflow based on the regional crustal age model presented in Chapter 5.