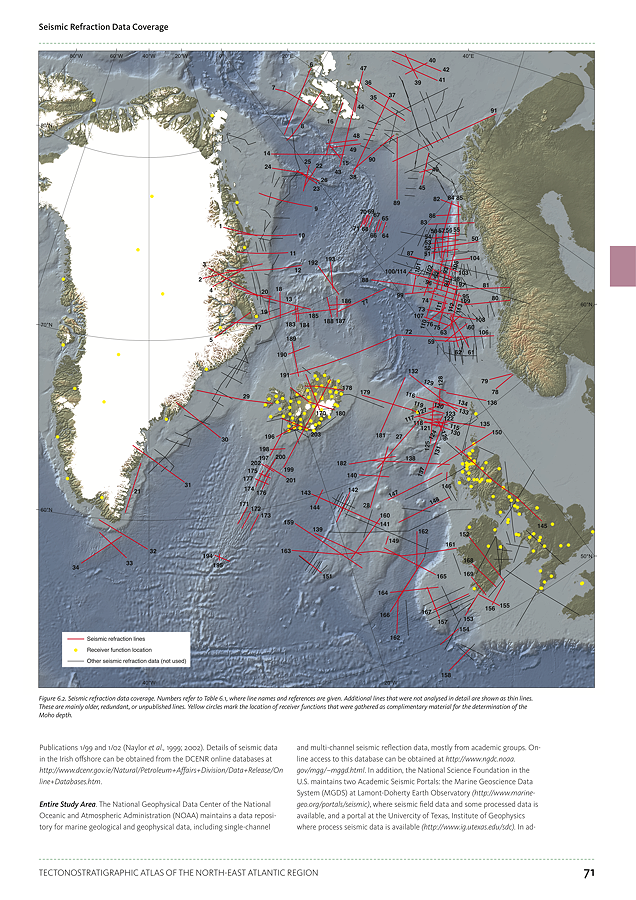 This chapter presents the crustal structure, tectonic features, and the basement morphology in the North-East Atlantic. The continental margins were formed during rifting and continental break-up in Cenozoic time, but experi- enced a long history of crustal forming and deformation processes since the Devonian. Thus, the region shows a wide variety of crustal types, structural inventory and sediment distribution. Extrusive and intrusive magmatism before and during the break-up process produced volcanic and igneous layers in several crustal levels (Holbrook et al., 2001; Mjelde et al., 2003; White et al., 2008).

The crustal structure provides the foundation for the understanding of the regional tectonic evolution. A large part of this chapter is based on a thorough review of existing seismic refraction data, supplemented by seismic re- flection and potential field data (Chapter 3). The seismic reflection method is commonly used to obtain detailed images of the subsurface structure like internal layering and displacements (e.g., faults). In particular, sedimentary sequences can be displayed at high resolution. Our mapping of structural elements (see 6.3.1.), basement morphology (see 6.4.) and sediment thickness (see 6.2.4.) is primarily based on seismic reflection data. In contrast, seismic refraction data do not provide a direct image of the subsurface structure but yield information on seismic velocities after some modelling techniques have been applied to the data. These velocities can provide constraints on the lithology of the rocks. The spatial resolution of refraction data is generally less than that of reflection data. However, most refraction profiles have a penetration down to the Moho and the underlying uppermost mantle. In contrast, most seismic reflection experiments are designed to provide images down to the basement.

The refraction data in this compilation were acquired between 1969 and 2011, and, hence, are very diverse in terms of data acquisition, density, and subsequent velocity modelling. While we tried to assess the velocity models as objectively as possible, a number of inconsistencies between neighbouring or crossing lines were detected that had to be dealt with. In the process of the quality assessment, uncertain features of the models were excluded in the compilation of the derived maps.